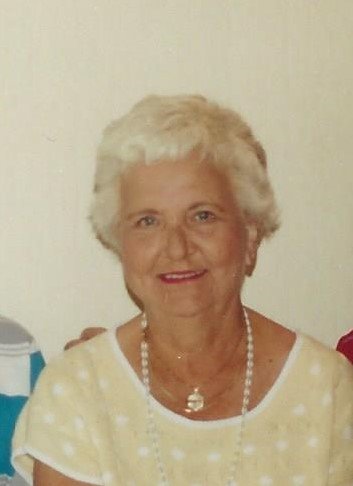 Mary Frances “Cass” Swink Kennedy, 95, of Fairmont, died Wednesday, January 9, 2019.  She was born on a farm outside of Cass in Pocahontas County, daughter of the late Price L. and Lela Alice Cassel Swink. After graduating from Green Bank High School, she left home to attend business college and settled in Fairmont.  She was so homesick that she was got the nickname ‘Cass’ after her hometown; and that is the name most of her friends knew her by.

She met and married John P. Kennedy in Fairmont, and they were one of the first couples to build and move into Country Club Estates. They worked together at the Marion Paper Company and subsequently Alling & Cory, which they both retired from.  They enjoyed many adventures together and travelled extensively, even going to Cuba (pre-Castro) and South America.

Cass was an avid golfer and was a member of the United States Golf Association, West Virginia Golf Association, the Mountaineer League and the Fairmont Field Club, she had won various championships over the years, even scoring a hole in one in 1985.  She was still an active golfer until she gave it up just shy of her 94th birthday.  She also really enjoyed following the PGA.

She enjoyed following various sports, especially golf, but she was a true Mountaineer fan, attending many games both home and away in years past. She also loved flowers and enjoyed sitting on the back porch at home or on the family farm.

In lieu of flowers, the family requests memorial contributions be made in Cass’s memory to the Marion County Soup Opera, 425 Quincy St., Fairmont, WV 26554 or to Wanless Cemetery, c/o Wayne Cassell, 4055 Back Mountain Road, Cass, WV 24927.

She was preceded in death by her loving husband, John P. Kennedy; brother William ‘Lake’ Swink; and sisters Thelma Swink Costello and Norma Swink Hinchman.  Friends may call at Ford Funeral Home, R.C. Jones Chapel, 1410 Country Club Road, Fairmont from 10am to 1pm with the funeral service at 1pm on Saturday, January 26th.  Committal services will be held at 11am Sunday, January 27th in Wanless Cemetery, Cass. Online condolences may be made to the family at www.fordfuneralhomes.com.

To plant a beautiful memorial tree in memory of Cass Kennedy, please visit our Tree Store