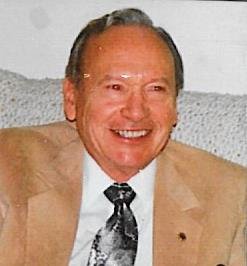 Clyde S. Judy, 96, of Fairmont, WV, Passed away Thursday evening in Fairmont Regional Medical Center.  He was born February 27, 1921 in Fairmont, son of the late Samuel A. and Stella M. Janes Judy.  He was preceded in death by his wife, Eleanor R. Freeland Judy, on February 5, 2012. Clyde was a 1939 graduate of Fairmont Senior High School where he was class president, and a 1951 graduate of Fairmont State College. He was a Veteran of the United States Army Airforce Corp where he served during W.W.II. He flew 35 combat missions as a bomber pilot out of Africa and Italy. Upon his return to the United States he became a B-24 instructor pilot. Thereafter; he was reassigned to Squadron Adjutant and then to Squadron Commander at Lowery Field, Denver, Colorado. His military citations include: Distinguished Flying Cross, Air Medal with 2 Oak Leaf Clusters, Purple Heart, Distinguished Unit Badge, France Liberation Medal, W.W.II Victory Medal, and the European Middle East-Africa Service Ribbon with 4 battle stars. After his military service he worked in a number of engineering, construction, and sales positions. His last full time position was Eastern Regional Sales Manager for Allen and Garcia Company of Chicago, Illinois. He retired from full time employment in 1983. He was the first commander of the Mountaineer Chapter 724 of the Military Order of the Purple Heart in Fairmont, WV. He was then elected to the office of State Commander and Served as Aide de Camp to the National President. He was a representative of the Marion County Veterans Council and was selected to serve as chairman of the Veterans Plaza committee and did so for the first 5 years of its existence. He helped form the General Pete Everest Chapter of the Air Force association and served as its second president. Clyde was a past Chairman of the Upper Monongalia Valley SCORE Chapter, past commander of the Marion County Chapter of the American Red Cross, past Chairman of Fairmont Union Mission Board of Directors, past president of the Fairmont Lions Club, past Chairman of the Administrative Board of Central United Methodist Church, member of the Air Force Escape and Evade Society, a Life Member of the VFW Post 629 in Fairmont, WV, and a member of B.P.O.E. 294 Elks Club. He was a member of Trinity Assembly of God in Fairmont where he served as Chairman of Senior Members. He enjoyed working in his garden, spending time with his family, traveling, and doing community service, as well as attending church and sporting events. As a young man, he enjoyed his time as a Boy Scout Master and a coach in church league basketball. Survivors include 2 sons and their spouses, David and Rita Judy of Parkersburg, WV and Allen and Gail Judy of Fairmont, WV, 4 grandchildren, Beth and Bill Kohler of Parkersburg, WV, Scott Judy of Parkersburg, WV, Todd and Becky Judy of Fairmont, WV, and Tyson and Michelle Judy of Charleston, WV, and 2 great grandchildren, Killian Judy of Fairmont, WV and Bryson Judy of Parkersburg, WV. He was preceded in death by 3 brothers, George, Robert, and Thomas Judy. Family and friends may call at Ford Funeral Home, Ford Chapel, 201 Columbia St., Fairmont, WV from 12noon until 7pm on Sunday and from 10am until 11am on Monday. Funeral Services will be held in the funeral home Monday, May 8, 2017, at 11am, with Revered Charles Fancher officiating. Burial will follow in Bridgeport Cemetery in Bridgeport, WV. The family requests that memorial donations be made to W.V. Rescue Ministries of Marion County, 107 Jefferson St., Fairmont, WV. Online condolences may be made to www.FORDFUNERALHOMES.com.