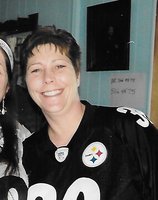 Tonya Deann Eddy, 47, of the Pleasantview Community in Rivesville, passed away on Saturday, November 14, 2020 at the United Hospital Center in Bridgeport. She was born August 29, 1973, in Fairmont, a daughter of Bernard and Betty Eddy of Pleasantview, Rivesville. Tonya was a 1992 graduate of North Marion High School and later received a degree from the OIC Training Academy. She worked with Wal-Mart where she was an Assistant Manager. Tonya had a special love for the ponies at Assateague Island and will be remembered for her love of animals. In addition to her parents, Tonya is survived by her sister Joyce (Kenneth) Murphy, her brother Rodger (Kathy) Eddy, and her sister Michelle Shipley. Also surviving are her two nieces, six nephews, six great nieces, and two great nephews. Tonya also leaves behind her fur baby Reggie. Memorial donations may be made to the Marion County Humane Society, PO Box 905, Fairmont, WV 26554 or to the Assateague National Park, c/o Superintendent - Assateague Island National Seashore, 7206 National Seashore Lane, Berlin, MD 21811. The family has entrusted Ford Funeral Home, DeGarmo Chapel, 206 Second Street, Rivesville with Tonya’s funeral services. In keeping with her wishes, cremation services will take place and private family memorial services will be held at a later date. Online condolences may be made to www.fordfunealhomes.com.