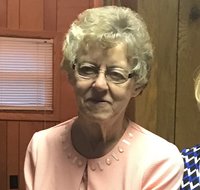 Beverly Ann Shaver Henderson, 79, of the Glady Creek Community, passed away on Sunday, October 11, 2020 at her residence. She was born August 13, 1941 in Fairmont, WV and was the last surviving child of the late Ray C. and Ethel E. Taylor Shaver. She was preceded in death by her husband of 43 years, Lonnie C. Henderson in 2005. Beverly was a 1959 graduate of East Fairmont High School. She retired as the office manager from S.M. Kisner and Sons in Fairmont, and previously worked with G.A. Brown and Son Inc. as well as the A&P Tea Co. She was an avid bowler and belonged to leagues in both Fairmont and Grafton. She served as past treasurer of the Glady Creek Cemetery and was a part of developing the perpetual care program within the cemetery. Beverly was a devoted mother and grandmother, and was a dedicated fan for all of her grandsons’ teams. She was the toughest person most people would ever encounter, but was also a selfless person who would take care of everyone else before herself. There was always a seat at her table for family, friends, or a person in need who would become a friend. No one ever went home hungry. There was never a dull moment when she was around. Beverly is survived by her daughter, Lori and her husband Robert Shumaker, two grandsons, Eli Michael Shumaker and Zachary Kirby Shumaker and his girlfriend Hailey Eastham, and her special friend, Ron Kisner. In addition to her parents and her husband, Beverly was preceded in death by her son, William Kirby Henderson in 1987, her siblings, Charles Shaver, Richard Shaver, William Shaver, Thomas Shaver, Helen Davis and Ruth Wilford, as well as her in-laws, Wesley Henderson, Stephen Henderson, Francis Henderson, Davidson Henderson, Ida May Linn, Catherine Henderson, and Mary Henderson Memorial donations may be made to the Glady Creek Cemetery for the perpetual care program, please make your checks to Edward Jones, c/o Donna Batson, 459 Burns Farm Road, Grafton, WV 26354. The family has entrusted care and arrangements to the Ford Funeral Home, Ford Chapel, 201 Columbia Street, Fairmont, WV. We appreciate in the unknown time with the COVID-19 pandemic that attending a visitation may not be in your best interest. Should you be able to celebrate her life, the family respectfully requests that masks be worn by all visitors and social distancing be practiced. Friends will be received at the funeral home on Sunday, October 18, 2020 from 12 noon until 2PM. A memorial service will be held in the funeral home at 2PM with Pastor David Knotts officiating. The inurnment will follow at the Glady Creek Cemetery. Online condolences may be made to www.fordfuneralhomes.com.