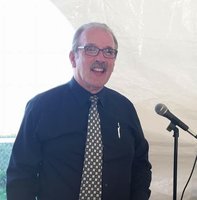 Edmond W. Morrison, 70 years of age of Maple Lake Community passed away on Sunday, July 26, 2020 at his residence surrounded by his loving family. He was born July 13, 1950 the son of the late John Morrison and Kathleen Hostutler Martin. He is survived by his wife Carol Bonshire Morrison. They had celebrated forty-nine years of marriage. He is also survived by a daughter Brooke Carnes and husband Brant of Bridgeport, WV and their children Bryce and Brody; son Cory Morrison and girlfriend Kara Larew of Newburg, WV; a step-sister Gloria Mazza of Nutter Fort, WV; two sisters-in-law Beverly Fogg and husband Tom of Bridgeport, WV and Terri Olsson and husband Jan of Cincinnati, OH; a brother –in-law Bill Bonshire and wife Kathi of Snellville, GA and several nieces, nephews and cousins. Ed had two faithful canine members of the family Rylee and Gabby. Ed grew up in Nutter Fort (many of the community remember Ed as the paperboy) and graduated in 1968 from Roosevelt High School where he played in the marching school band. While in high school, he volunteered for Harrison County Emergency Squad. After graduation, he enrolled in broadcasting school at the Career Academy in Columbus, OH. and began his career in radio. He began working for WHAR/WVHF in 1968. On the air he went by the radio name “Bobby Edwards”. Besides spinning tunes, he also was in radio sales. Music and performing was a big part of his life. Besides radio, he played the saxophone and vocals for the band “D and the Malibus”. In 1971 he married Carol and two days later left for military training in Bainbridge, MD for the United States Navy. Following six years of serving his country proud, he returned to West Virginia and graduated from Fairmont State College. He then began a sales career in industrial and commercial lubricants and fuels. In 1996, he started a partnership of Quick Slick Oil Change Centers in Bridgeport and Buckhannon. Since 1983, he established and was the owner of Night Life Entertainment, a mobile disc jockey service for wedding receptions, class reunions and private parties. He felt honored to share his music and voice with others whether it was small gatherings or large crowds like the 50th anniversary of Bridgeport Indian Football. Due to the pandemic and having to keep social distancing, Ed celebrated his wife’s birthday with a drive-by birthday wishes and music. The fellowship of music continued each weekend as he entertain his Maple Lake friends with music from his driveway. They referred to him as the “The Driveway DJ”. Ed and Carol raised their family at Maple Lake where served several years on the board of directors. He coached their youth sports teams and often led the way when the teams needed fundraising. Following his retirement in 2019, he was a funeral attendant for Ford Funeral Home in Bridgeport. The Ford family appreciated and will remember Ed as a man with great character that the community loved. Ed was a faithful volunteer with the Bridgeport Fire Department and the Marion County Emergency Squad. He was part the committee to establish the Marion County 911 Center. He was a member of Bridgeport United Methodist Church, a member and previously served as an officer for the Harrison County Elks Lodge #2875. The family requests donations be made in Ed's memory to the Bridgeport Fire Department, 515 West Main Street, Bridgeport, WV 26330. Because Ed so enjoyed his neighbors and friends, the family is celebrating his life by inviting you to simply drive by his resident (1072 Maple Lake Road, Bridgeport) on Saturday, August 1, 2020 from 2:00 PM – 5:00 PM. A wave, a honk and a smile always meant so much to Ed. His favorite music will be played by his grandsons, son-in-law and his favorite DJ “Brother Stu” Hurd. Due to the pandemic, the family requests friends to respect social distancing. Condolences may be extended to the family at www.fordfuneralhomes.com. The Morrison family has entrusted the care and arrangements to the Ford Funeral Home, 215 East Main Street, Bridgeport, WV.