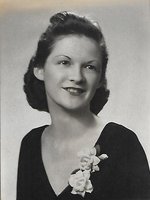 Doris Jeanne Flint, 98, a lifelong resident of Fairmont, passed away on March 6, 2020 at her residence. She was born on June 28, 1921, the daughter of the late Patrick J. Prendergast and Edith Clevenger Prendergast Collins. Mrs. Flint loved being a homemaker, hostess, and cook. She took a special joy in being an adopted grandma to the children of the First Baptist Church and loved taking them under her wing. After graduating from Fairmont Senior High School in 1939, she worked at the Jones Department Store, WMMN Radio Station, and the Marion County Courthouse. She was an active member of the Mt. Vernon Garden Club, Fairmont Women’s Club, the Civic League, the YWCA, and various civic organizations. She was the longest living member of the First Baptist Church of Fairmont. She was preceded in death by her husband, U.D. (Johnny) Flint, and by her only son, Mark David Flint, of whom she was extremely proud and who died on March 4, 2012 after having an impressive career as a conductor of opera in theatres across the U.S. and Europe. She was also preceded in death by her brother and sister-in-law, Leo P. and Ernestine Prendergast. Survivors include her sister-in-law, JoyceAnne Flint and brother-in-law Jack Flint and wife, Betty Lou, all of Colfax; and nieces and nephews which include Dr. Robert Flint and wife, Melissa, of Fairmont; Dr. Linda Ray of Colfax; Cathy Linger and husband, Don, of Buckhannon; Jack O. Flint and wife, Becky, of Fairmont; John Prendergast and partner, Stephen Glicken, of Beaver Meadows, PA; David Prendergast and wife, Elizabeth, of Boston, MA; Anne Samol and husband, Tom of Wheeling; and Paul Prendergast and wife, Mary, of Washington, D.C. She is also survived by her dedicated caregivers: Penny McElwrath of Burleson, TX; Steven Horak of Leonia, NJ, who was her son’s life partner; and Steven’s sister, Carol Kniola, of Odessa, WA. Much gratitude must also be paid to the staff of Amedysis Hospice for their invaluable and compassionate care , to the caring and capable nursing staff of Fairmont Regional Medical Center, and to the private caregivers who helped make her feel so loved and pampered in her last months: Ruth Cosper, Jo Baker, Misty Hoover, Sheila Womack, and Sheila Costin. Memorial contributions may be made to The First Baptist Church of Fairmont at 901 Fairmont Avenue, Fairmont, WV 26554, or to the Humane Society of Marion County of PO Box 905, Fairmont, WV , 26554. Friends will be received at the Ford Funeral Home, R.C. Jones Chapel, 1410 Country Club Road, Fairmont, WV 26654, on Wednesday, March 11, 2020 from 3PM until 8PM. Mrs. Flint will lie in state at The First Baptist Church of Fairmont, 901 Fairmont Avenue, Fairmont, WV 26554, on Thursday, March 12, 2020 from 10AM until 11AM, with the funeral service beginning at 11AM. Reverend Valerie Gittings will officiate, with interment to follow at Rest Haven Memorial Gardens in Fairmont. Condolences may be sent to the family at www.fordfuneralhomes.com.