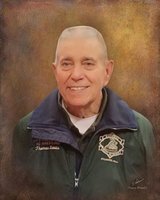 Thomas Earl Lewis, 82 years of age of Fairmont, WV passed away on Wednesday, September 4, 2019 in his home following a courageous battle with cancer.  He was born March 14, 1937 in Fairmont, WV, the son of the late Paul and Mae Louise Haskell Lewis.

He is survived by his wife Margie Cain Lewis.  They had celebrated sixty-three years of marriage.  He also survived by five daughters and sons-in-laws Toby and Dr. Scott Mercer, Cathy and Tom Hlebinsky, Joni and Kenny Parrish, Cheryl and Dr. Randy Turner and Carol and Bob Bosley; thirteen grandchildren and thirteen great grandchildren Nathan Mercer and his children Madison and Connor, B.J. and Jeremy Davis and their children Jackson and Carson, John and Wendy Hlebinsky and their daughter Madeline, Matthew and Sheena Hlebinsky and their children Jadeyn and Liam, Amanda Parrish, Cassidi and Ben Berry and their children Kyler and Braelyn, Beau and Marissa Robinson, Makenzi Robinson and son Ty, Casey Turner and her daughter Claire, Drew Turner, Jaclyn and Dan Pethtal and their children Caden and Myla, Jarrod Bosley and Jayce Bosley; one sister Carol McWilliams and several nieces and nephews.  He was also preceded in death by a brother Robert Paul Lewis.

Tommy was a 1955 graduate of East Fairmont High School.  He owned and operated from 1957-1979 Thomas E. Lewis Builders in Fairmont.  He built over 1500 homes during his construction years.  In 1979, he opened Four Season Recreation, Inc.  an operated the business until 1999.

He supported East Fairmont High School athletics for many years.  He coached wrestling, football and track.  The EFHS Athletic Association presented him with a distinguished award of service for over 50 years of coaching.  In 2012, he was inducted in the National Wrestling Hall of Fame in Stillwater, OK.

He was a member of the 201st Headquarters Armor Division in Fairmont, WV.