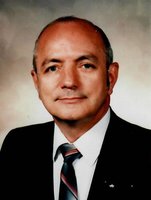 Dick graduated from East Fairmont High School in 1958 and attended Fairmont State College. He served in the Army Reserves from 1962 through 1968. He was also a Boy Scout Executive for Preston County, a 33rd Degree Mason of Masonic Lodge No. 90 in Preston County, and the Osiris Shrine of Wheeling.

Dick worked as a manager for Clarksburg Foodland before purchasing various Foodland stores in Clarksburg (Rosebud and Bridgeport Hill), Grafton, Shinnston, Elkins and Westover. He also purchased, operated and began many businesses in West Virginia including True Value Hardware, Snyder Potato Chip Company, Tuccillo’s Restaurants, WBUC, WBTQ, and the BEAR radio stations; and invested in residential and commercial real estate in Harrison and Taylor Counties. In 1987 he was one of nine investors who opened First State Bank in Elkins, WV. One of his biggest accomplishments was establishing Greene’s Plaza Shopping Center in Grafton, WV.

Dick served on the board of the Salvation Army and Morgantown Pastoral Counseling Center. He was a member of the West Virginia Oil Marketers & Grocers Association.

Memorial contributions can be made to the West Virginia Hospice, 6 Hartman Plaza, Buckhannon, WV 26201 or Shriners Hospital for Children.

Condolences may be extended to the family at www.fordfuneralhomes.com.  The Greene family has entrusted the care and arrangements to the Ford Funeral Home, 215 East Main Street, Bridgeport, WV.