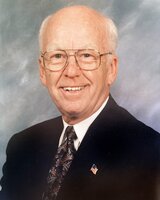 Glenn Reckart, 90, of Fairmont, West Virginia, passed on January 23, 2023. He was born on June 08, 1932 to James William and Ethel Reckart in Friendsville, Maryland. Glenn was preceded in death by the love of his life, his wife Evelyn Reckart, and his son Anthony Reckart. Glenn joined the Air Force in 1949 where he served time in Japan and Korea and earned the Good Conduct Medal, Korean Service Medal and United Nations Service Medal. He moved to Fairmont, WV where he married and raised his three children. He was known in Fairmont as the Kinney Shoe Guy where he worked for 40 years and brought smiles, balloons, and well-fitting shoes to the community. Glenn was a longtime member of the Fairmont Kiwanis Club where he served in various roles such as Director and President. He was also an active member of Gateway United Methodist Church. Glenn was known to his grandchildren as “Pop Pop” and they remember him for his love of old cartoons, his heart-felt laugh, classic suit collection and white hankies, blue slippers, his warm hugs as he carried them to the car, love of sports, ice cold water and spicy foods and his complete disdain of dunking cookies and snakes. He is survived by his daughters, Catherine (Frank) Boyce, and Patricia (Bill) Ford; Grandchildren Jennifer (Fred) Clark, Ryan (Jessica) Ford, Melissa (Neil) Korzun, Amy (John) Hammond, Alan (Billeigh) Ford, and Sarah (Marcus) Phillips; Great grandchildren Freddy, Kyla, Makayla, Bridget, Jack, Cate, Andrew, Ford, Emma and the upcoming baby-girl Ford. And great-great grandchildren Carolina, Lennon and Alexander. Friends and family will be received at Ford Funeral Home, 201 Columbia Street, Fairmont, on Friday, January 27th from 5-8 PM and again on Saturday, January 28th from 1 PM until the time of the funeral service at 2 PM with Rev. Larry Buckland officiating. Interment will take place at Mt. Zion Cemetery with full military funeral rites being conducted at the graveside. Glenn was a passionate advocate of the American Cancer Society and memorial contributions may be made in Glenn’s honor to the American Cancer Society at www.cancer.org. Online condolences can be sent to the family at www.fordfuneralhomes.com.