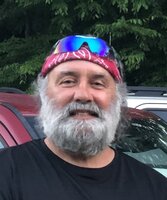 Alec Ray McCallister, 62, of Rivesville passed away on Thursday, January 12, 2023, at his home. He was born in Cleveland, OH on October 27, 1960, a son of the late William Edgar McCallister and Amelia George McCallister. Alec is survived by a brother, George McCallister and his wife Deborah and their son, Zak; aunts, Peggy Toothman, Evelyn McCallister, and Pattie Gearde; as well as other family and friends. In addition to his parents, Alec was preceded in death by a brother, Brian McCallister. Alec was a graduate of North Olmsted High School and a member of Hagans Christian Church. He enjoyed Harley Davidsons, sports, going to car shows, and visiting his neighbors in Highlawns. The family requests memorial contributions be made in Alec’s memory to DeGarmo Funeral Home, PO Box 488, Rivesville, WV 26588, or to a charity of your choosing. The family will receive friends at Ford Funeral Home, DeGarmo Chapel, Second & Jasper St., Rivesville, WV 26588, on Saturday, January 21, 2023, from 11 a.m. until 1 p.m. A memorial service will be held in the funeral home on Saturday, January 21, 2023, at 1 p.m. with Pastor Isaac Harmon officiating. A committal service will follow at McCurdysville Cemetery. Online condolences may be made to the family at www.fordfuneralhomes.com.