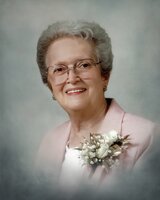 Mrs. Flora Ann Luciano, 100 years of age of Bridgeport, WV passed away on Thursday, January 12, 2023 at Stonerise Bridgeport surrounded by her family. She was born December 30, 1922 in Clarksburg, WV the daughter of the late Dominic and Mary Spina Filippine. She was preceded in death by her husband Guy Thomas Luciano on November 16, 2022. On June 19, 1948, she married Guy Luciano. The wedding took place at St. John’s Catholic Church in Clarksburg, WV. Together they had three children; Marilyn (Ken) Hibbard of Newport, MI, Melinda (Dr. Michael) Hazey II of Bridgeport, WV and Vincent (deceased). Guy and Flora are blessed with five grandsons: Dr. Michael (Dr. Carrie) Hazey III of Bridgeport, WV, Dr. Matthew (Maggie) Hazey of State College, PA, Marc Hazey of Bridgeport, WV, Todd Hibbard of Garden City, MI, and Brandon (Kristine) Hibbard of Newport, MI. The little lights of their lives are their eight great grandchildren; Anthony, Emma, Abigail, Annabella and Jonathon Hazey and Mason, Annabella, and Catherine Hibbard. She is also survived by a sister-in-law Neva Stalenski of Lake Tahoe, NV and many nieces and nephews. She was the last surviving member of her family, being preceded in death by three brothers Joseph “Joe” Scalise, Samuel “Chay” Filippine and James “Flip” Filippine and one sister Clorinda “Lindy” Cavallaro. She attended Victory High School and graduated in 1941. Flora served as a WAVE in the United States Navy. In February of 1943, she was accepted in the first group of women to be trained at Hunter College, NY. After training in New York, she attended A&M College in Stillwater, OK. Her tour of duty began at the Personnel Office at Great Lakes Naval Station, IL. Flora was honorably discharged from the Navy in December of 1945 after serving her country for almost three years. When she returned home, she was employed at Fourco/Rolland Glass before marrying and raising three children. She would later work as a Medical Secretary and retire from the Office of Dr. Robert Wilson. Flora will be greatly missed by her family, friends and extended family at Stonerise Bridgeport. In lieu of flowers, donations can be made in Flora’s memory to All Saints Catholic Church Building Fund, 317 East Main Street, Bridgeport, WV 26330. Friends will be received at All Saints Catholic Church, 317 East Main Street, Bridgeport, WV on Monday from 4:00 M – 8:00 PM. A Vigil Service will be held on Monday at 7:30 PM and the Catholic Funeral Liturgy will be celebrated in the church on Tuesday, January 17, 2023 at 10:00 AM with Reverend Father Walter Jagela presiding. The entombment will follow at Holy Cross Cemetery, Clarksburg, WV. Condolences may be extended to the family at www.fordfuneralhomes.com. The family has entrusted the care and arrangements to the Ford Funeral Home, Bridgeport, WV.