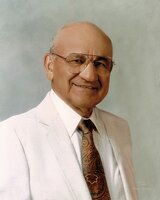 Mr. Guy Thomas Luciano, 101 years of age passed away on Wednesday, November 16, 2022. He was the son of the late Vincenzo and Maria Ventura Luciano. He was born on December 28, 1920 in Berryburg, WV. He attended Victory High School and graduated in 1939. Guy served in the United States Army for three years during World War II. His tour of duty took him to the South Pacific Islands, namely New Caledonia. After an honorable discharge from the Army, he began his working career at Forco/Roland Glass. In 1983, he retired with 45 years of service as a Hot End Superintendent. On June 19, 1948, he married Flora Filippine. The wedding took place at St. John’s Catholic Church in Clarksburg, WV. Together they had three children; Marilyn (Ken) Hibbard of Newport, MI, Melinda (Dr. Michael) Hazey II of Bridgeport, WV and Vincent (deceased). Guy and Flora are blessed with five grandsons; Dr. Michael (Dr. Carrie) Hazey III of Bridgeport, WV, Dr. Matthew (Maggie) Hazey of State College, PA, Marc Hazey of Bridgeport, WV, Todd Hibbard of Garden City, MI, and Brandon (Kristine) Hibbard of Newport, MI. Their little lights of their lives are their eight grandchildren; Anthony, Emma, Abigail, Annabella, Jonathon Hazey and Mason, Annabella, and Catherine Hibbard. He is also survived by a sister Neva Stalenski of Lake Tahoe, NV. He was also preceded in death by five sisters Rose Picco, Alvera Robinson, Sarah Addis, Angeline DeMarco and Roma Carder. Guy was an avid sportsman! He loved hunting, fishing, golfing and at the age of 61 began downhill skiing with his grandchildren. He shared many stories about his job and sporting activities with his family and friends. One of his proudest sports moments was the day he made a “hole-in-one” at Bel Meadow Golf Club. Guy and Flora celebrated 74 years of marriage. They continued to cherish each day together as they resided at Stonerise of Bridgeport. In lieu of flowers, donations can be made in Guy’s memory to All Saints Catholic Church Building Fund, 317 East Main Street, Bridgeport, WV 26330. Friends will be received at All Saints Catholic Church, 317 East Main Street, Bridgeport, WV on Friday from 4:00 M – 8:00 PM. A Vigil Service will be held on Friday at 7:30 PM and the Catholic Funeral Liturgy will be celebrated in the church on Saturday, November 19, 2022 at 2:00 PM with Reverend Father Walter Jagela presiding. The entombment will be held at a later date at Holy Cross Cemetery, Clarksburg, WV. Condolences may be extended to the family at www.fordfuneralhomes.com. The Luciano family has entrusted the care and arrangements to the Ford Funeral Home, Bridgeport, WV.