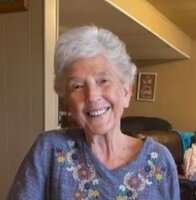 Margaret Ann Springer Reed, 88, of Fairmont, passed away on Friday, July 22, 2022 at her home surrounded by her family. She was born April 15, 1934, in Terra Alta, a daughter of the late Felix and Minnie Mae Springer. Margaret is survived by her son Scott Reed and his wife Tina; grandchildren, Taylor Reed Mancini and her husband Braden and John Reed and his fiancé Elizabeth Williams; sister, Juanita Satterfield; brother, Tom Springer and his wife Roxanne; companion of eight years, Otis Shaver; daughter-in-law, Karen Reed; as well as several nieces and nephews. In addition to her parents, Margaret was preceded in death by her husband Walter Scott Reed, Jr.; son, Thomas Reed; brothers, Zack, Charles, and Jarrett Springer; and sister, Elouise Lowther. Margaret was a 1952 graduate of Fairmont Senior High School and worked for AT&T/Belle Atlantic Telephone Co. as a supervisor prior to retirement and recently for Muriale’s Restaurant. She and her sister, Juanita, managed the Wood’s Boat House Restaurant throughout their high school years. She attended Eldora United Methodist Church, greatly enjoyed spending time with her family, hosting family gatherings and holidays, traveling with her family and companion, as well as going on vacations to Myrtle Beach as a family. The family would like to thank the staff of Amedisys Hospice, especially Maggie, for their loving support and care. The family requests memorial contributions be made in Margaret’s memory to Eldora United Methodist Church, 23 Sapps Run Rd. Fairmont, WV. 26554. In accordance with Margaret’s wishes her body will be cremated and a private memorial service will be held at a later date. The family has entrusted arrangements to Ford Funeral Home, 201 Columbia St. Fairmont, WV. 26554. Online condolences may be made to the family at www.fordfuneralhomes.com.