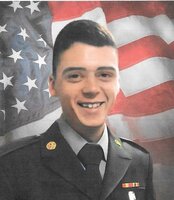 PFC Preston Duncil, 23 years of age of Fort Knox, KY and formerly of Marion County, WV passed away Thursday, July 14, 2022 in Kentucky. He was born January 1, 1999 in Fairmont, WV the son of Amanda Bartholow Carter and her husband Jonathan and Michael Duncil. He is also survived by a daughter Aralynn Duncil of Worthington, WV; two brothers Airman First Class Patrick Duncil of Anchorage, AK and Jeremiah Duncil of Idamay; two sisters Briana Duncil and Michaela Duncil both of Idamay; one step-brother Mason Carter of Shinnston, WV; maternal grandparents Cindy Harbison and her husband Larry of Bridgeport, WV and Robert Bartholow and his wife Derice of Fairmont, WV and paternal grandfather Tom Duncil of Fairmont, WV. He was preceded in death by a paternal grandmother Diane McElfresh. Preston was inducted into the United States Army in 2021 and completed his basic training in Missouri. He was a heavy construction equipment operator for the military while stationed at Fort Knox, KY. At an early age, he enjoyed the freedom of riding motorcycles. He loved his Harley Davisson taking rides with friends. He went with his Grandma Cindy to South Dakota for Harley Week and many other destinations. He was a member of the American Heroes Motorcycle Association. Friends will be received at the Ford Funeral Home, Ford Chapel 201 Columbia Street, Fairmont, WV on Saturday from 10:00 AM – 2:00 PM. The funeral will be held in the funeral home on Saturday, July 23, 2022 at 2:00 PM with Pastor Scott Krepps presiding. Full military rites will be provided following the service by his military comrades of the United States Army from Fort Knox. Condolences may be extended to the family at www.fordfuneralhomes.com. The family has entrusted the care and arrangements to the Ford Funeral Home, Ford Chapel.