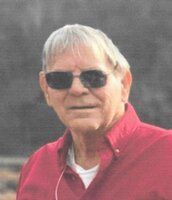 Harry E. Ashby, 81, passed away at the Manchin Assisted Living at White Oaks. He was born in Fairmont on March 26, 1941, son of the late Clifford and Geneva Smith Ashby. Harry is survived by his daughter, Donna Cassella and her husband Sam Cassella Jr. of Fairmont; son, David Ashby and his husband John Jacobs of Fairmont; step-daughter, Gina Montroso of Huntington; grandchildren, Trevor, Sophia, and Jacob; great-granddaughter, Elizabeth; sisters, Louise, Betty and her companion Ronnie, and Freda and her husband Jim; as well as several nieces and nephews. In addition to his parents, Harry was preceded in death by his loving wife, Patricia Ashby and a grandson, Justin Cassella. Harry was a graduate of Fairmont Senior High School and a member of the Central Church of Christ in Clarksburg. He worked as a carpenter for GA Brown & Son and enjoyed the outdoors, hunting, fishing, and traveling. Harry was a huge WVU fan and had a very strong love for his family. He would have spent every second with his family if he could have. The family requests memorial contributions be made in Harry’s memory to WVU Medicine Hospice, 2673 Davisson Run Road, Clarksburg, WV 26301, or to the Dementia Society of America, PO Box 600, Doylestown, PA 18901. The family will receive friends at Ford Funeral Home, 201 Columbia St., Fairmont, WV 26554, on Wednesday, July 20, 2022, from 10 a.m. until 5 p.m. The funeral service will be held in the funeral home on Wednesday, July 20, 2022, at 5 p.m. with Joel Boggess officiating. A committal service will be held on Thursday, July 21, 2022, at 1 p.m. at Eventide Cemetery in Spencer, WV. Online condolences may be made to the family at www.fordfuneralhomes.com.