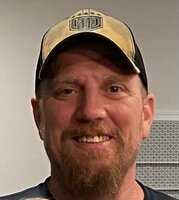 Mr. David Floyd McCoy (Little Dave), 50 years of age of Wallace, WV sadly passed away at his residence on Saturday, June 18, 2022. He is survived by his parents David C. McCoy of Fairmont, WV and Rebecca McCoy Spatafore, of Bridgeport, WV. He is also survived by his sister, Carrie Biddle, her husband, Scott, and their son, Hunter Reid. David was a beloved son, brother, grandson, uncle, and nephew. He will be greatly missed by all his family and friends. David was preceded in death by his Paternal grandparents, Floyd Edgar and Amelia Carol McCoy; His Maternal grandparents, David Edward and Doris Maxine Jenks; Great Grandma Peggy (Goldie) McCoy; his uncle Gregory Lynn McCoy; and his Aunts Patricia Louise Damren and Shirley Ann Williams. David was a 1990 graduate at Fairmont Senior high school. After graduation, he joined the US Marine Corps where he served his country for four years state side. Afterwards David had several jobs out of state, before returning home to West Virginia, where he worked for the Times West Virginian-newspaper; was an auto mechanic with his best bud, Keith; and worked in the Coal mines. David was gifted with artistic drawings which most people didn’t know. He also loved car mechanics and all the tools he collected and used. David loved everything Harley and enjoyed riding his Harley Duece; you would never see him without a Harley hat. He also loved hunting, fishing, and camping with his dad and cousin Scott McCoy at Smoke Hole. David always dreamed of having his own property and in 2020 purchased land in Wallace, WV where he planted his feet. He plowed his first garden, cleared the land, and soon bought his beautiful pit bull, Cassie. Life and holidays will never be the same without David. Thankfully, there are so many wonderful memories of his humor, love, and support. He will be cherished and sadly missed and forever be in our hearts. A Gathering to celebrate and honor David’s life will be held at the Ford Funeral Home, R.C. Jones Chapel, 1410 Country Club Road, Fairmont, WV on Monday, June 27, 2022 from noon to 4:00 PM. Condolences may be extended to the family at www.fordfuneralhomes.com. The McCoy family has entrusted the care and arrangements to the Ford Funeral Home, R.C. Jones. Chapel.