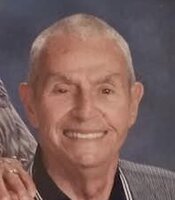 Roy Dean Morrison, Jr., 91 of Fairmont, WV, passed away on December 31, 2021, at Ruby Memorial Hospital. Roy Dean was born in Fairmont, WV to Dean and Velma Morgan Morrison on December 12, 1930. Roy went to State Street Grade School and graduated in 1949 from East Fairmont High School, where he played football. He attended Fairmont State College. Roy Dean was a military veteran, serving in the Army in Korea, and he was a member of Fairmont Masonic Lodge #9 A.F. & A.M. Roy was a retired City of Fairmont firefighter and a retired rural letter carrier for the postal service. He was a life-long member of Gateway United Methodist Church. A few things to know about him: he loved a Yann’s hotdog and spaghetti, he was always watching a western, he took pride in his work, and he loved his family. Roy and his wife Sally were avid travelers, spending many winters in Florida. They bragged about traveling through every state in the continental US except Nebraska. They celebrated their 50th wedding anniversary in 2000 with a trip to Spain. Roy enjoyed fishing with his life-long friend and co-worker Ralph Fast. Roy Dean and Sally were married December 16, 1950. They were honored at their 70th wedding anniversary in 2020, and celebrated their 71st anniversary this year. Roy Dean is survived by his wife Sally Neptune Morrison of Fairmont, WV; children, Debra Ebert (Michael) formerly of Virginia Beach and now Fairmont, WV, Janie Skinner (Michael) of Jacksonville, Florida, and RD Morrison (Cathy) of Fairmont, WV. He is also survived by eight grandchildren, Michael (Emily) Ebert, Jonathan Ebert, and Elizabeth Ebert all of Virginia Beach, VA, Julie (Pete) Ramsey of Greenville, SC, Jodie (Steve) Sanders of Jacksonville Beach, FL, Jaime (Todd) Bowermaster of Cheat Lake, Jenni Morrison of Morgantown, and Matt (Kirsten) Morrison of Fairmont and eleven great-grandchildren, Owen, Adalynn, Hannah, Ava, Jacob, John, William, Ryleigh, Baylee, Kane, and Kolt; as well as his good friend, Ralph Fast. Roy is preceded in death by his parents Dean and Velma Morgan Morrison. The family will receive friends at Ford Funeral Home, 201 Columbia St., Fairmont, WV 26554, on Monday, January 3, 2022, from 3 p.m. until 8 p.m. and on Tuesday, January 4, 2022, from 10 a.m. until 11 a.m. The funeral service will be held in the funeral home on Tuesday, January 4, 2022, at 11 a.m. with Pastor Grace Langenstein and Reverend Jim Zinn officiating. A committal service will follow at Mt. Zion Cemetery in Fairmont. Online condolences may be made to the family at www.fordfuneralhomes.com.