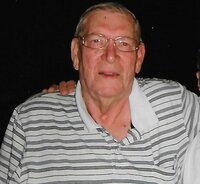 Keith Carson Haught, Jr., 82, of Fairmont, passed away on Tuesday, December 21, 2021 at the Sundale Nursing Home in Morgantown, WV. He was born June 10, 1939 in Fairmont, WV a son of the late Keith Carson and Mary C. Cunningham Haught, Sr. Mr. Haught was a Methodist by faith. He retired with Blacksville #2 Mine where he served as a motorman with Consol for over 23 years. He was also a volunteer with the Rivesville Volunteer Fire Department with over 43 years of service, as well as a volunteer with the Marion County Rescue Squad, as well as a founding volunteer with the Rivesville, Unit #31. Keith was a member of the Marion County Police Reserves, was a longtime member of the Rivesville Lions Club, and helped organize the Paw Paw Fair parade, the elimination dinner, Halloween Party, and Christmas Party with the Rivesville Fire Department. Mr. Haught is survived by his son, Randy and his wife Kim Haught of Fairmont, his daughters, Patty and her husband John Fox of Fairmont, and Ginny and her husband Rick Shaver of the Bellview Community. He is also survived by his grandchildren, Courtney and her husband Brandon Channey, John and his wife Kish Samargo, Brandon and his wife Tiarra Samargo, and Emily Shaver, as well as his eight great-grandchildren, his brother-in-law, Louis Yelcich of Fairmont, Jim and his wife Sue Myers of Bellview, Bill Myers of Kendall Michigan, and his sister-in-law, Sheila and her husband Paul Prospero of Carthage, NY. In addition to his parents, Mr. Haught was preceded in death by his wife, Rosemary G. Myers Haught, as well as his sister, Jo Ann Yelcich. The family has entrusted the arrangements with the Ford Funeral Home, DeGarmo Chapel, 207 Second Street, Rivesville. Private family graveside services will be held at the Mt. Zion Cemetery and Mausoleum in Fairmont and a memorial service will be planned for a later date. Online condolences may be made to www.fordfuneralhomes.com.