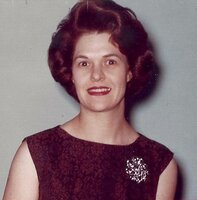 Mrs. Reva Belle McAllister of Bridgeport, WV passed away on November 17, 2021 at the United Hospital Center. She was born February 1, 1928 in Greenbrier County, WV the daughter of the late Ercha and Eva Coleman Anderson. She is survived by her husband Christopher Paul McAllister. They had celebrated sixty-seven years of marriage. She is also survived by two sons C. Paul McAllister Jr. and his wife Laureen of Clarksburg, WV and Charles Anderson McAllister and his wife Sharon of Winnemucca, NV; two grandchildren Chaslynn McAllister Kelly and her husband Brian and Charles A. “Chanse” McAllister both of Winnemucca, NV; one brother Curtis Anderson and his wife Velda of Ripley, WV and one sister Aleatha Howard and her husband Tom of Summerville, SC. She was also preceded in death by one brother Leon Anderson and three sisters Hilda White, Ruty Amick and Elma Baber. Reva was a 1946 graduate of Richwood High School and then attended West Virginia Business College. She worked for a few years as a credit clerk for Equitable Insurance, but then made a career change of being a homemaker for her family. She was a charter member of the Order of the Amaranth in Clarksburg Court #3 and a past worthy matron. Reva and Chris enjoyed participating in Grand Court of West Virginia as well as National Order of Amaranth. While living in Decatur, IL, she learned the game of golf and participated in many tournaments at the Decatur Country Club. She was proud of being the ladies club champion. They retired to West Virginia and became members of Christ Episcopal Church in Clarksburg. Friends will be received at the Ford Funeral Home, 215 East Main Street, Bridgeport, WV on Monday from 4:00 PM – 6:00 PM. The funeral service will be celebrated in the funeral home on Monday, November 22, 2021 at 6:00 PM with The Rev. Jordan Trumble presiding. The interment will be at Wallace Memorial Cemetery in Greenbrier County, WV on Tuesday, November 23, 2021 at 1:00 PM with The Rev. Joshua Saxe providing committal rites. Condolences may be extended to the family at www.fordfuneralhomes.com. The McAllister family has entrusted the care and arrangements to the Ford Funeral Home, 215 East Main Street, Bridgeport, WV.