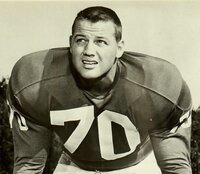 Robert Lee “Sam” Huff Sr., 87, College and Pro Football Hall of Famer, died peacefully on November 13, 2021. His daughter, Catherine Huff Myers, said he died of natural causes at Valley Health Winchester Medical Center in Winchester, Virginia. Huff was a legendary National Football League linebacker who played for both the New York Giants (1956-1963) and Washington Redskins (1964-1967, 1969). After retiring, he was a Redskins Radio broadcaster, Vice President of Marketing for the Marriott Corporation, and CEO of the West Virginia Breeders Classic Horse Race Association. Born in Edna Gas, West Virginia, he attended Farmington High School (now closed) where he received All-State honors for football and was named to the first team of the All-Mason DixonConference. In the summer of 1952, Huff married his high school sweetheart, Mary Helen Fletcher, In the fall, he entered West Virginia University and played football for the Mountaineers. At WVU, Huff was a four-year letterman, one of the "Fabulous Five" players, and was both First Team All-American in football and All-American in Academics in 1955. WVU retired his Mountaineers' No. 75. As a college player, he was spotted by a Giant's scout and was a third round draft pick of the New York Giants. Two legendary coaches, Vince Lombardi and Tom Landry, saw Huff's potential, and Landry, then defense coach for the Giants at the time, changed Huff's playing position from line to middle linebacker, and built the team's defense around him. The press called Huff "The Man in the Middle." In 1959, he was featured on the cover of Time magazine and in 1060 was the subject of Walter Cronkite's CBS Twentieth Century Series, "The Violent World of Sam Huff." Huff and his New York Giant teammates helped focus the nation's attention on NFL football when they were NFL Champions in 1956 and when they played in the 1958 NFL Championship Game labeled the "Greatest Game Ever Played," which was the first NFL game to go to sudden death in overtime. When he played for the Giants, sport writers loved the battles that made, Huff and two other football players, Cleveland's Jim Brown and Green Bay's Jim Taylor, legends in NFL history. He played seven seasons with the New York Giants. In 1964, Huff was traded to the Redskins. That day the Wall Street ticker tape read, "Huff Traded." Fans and reporters were stunned. It was the most controversial sports trade of the time. Huff continued his passionate playing with the Washington Redskins for 5 more successful seasons before retiring as a player/coach for Coach Vince Lombardi in 1969. While playing for the Redskins, Huff and Redskins teammate Sonny Jurgensen became life-long friends and after they retired, they paired again broadcasting Redskins games on WMAL Radio joined by Frank Herzog. The Redskins' documentary, "The Legend of the Brothers," was the story of their careers and friendship. Jurgensen helped Huff get the revenge he sought for being traded when the two ran the score up against the Giants to a highest in NFL history, 72-41. Huff's career highlights and awards made him one of the Top 100 NFL Players of All Time. He was a NFL Champion in 1956, in NFL 1950's All-Decade Team, five times in the Pro-Bowl,First-Team All-Pro twice, and four times Second-Team All-Pro. He was in the New York Giants Ring of Honor, and the Washington Redskins Ring of Fame. NFL player stats show his career 30 interceptions, 5 touchdowns, and 17 fumbles recovered. Huff is survived by his daughter Catherine Huff Myers of Alexandria, Va., a son, Joseph D. Huff of Fort Pierce, Fl., grandchildren, Timothy N. Huff, Mary C. Huff, and Robert L. Huff III, greatgrandchild Robert L. Huff IV, his former wife, Mary Helen Fletcher Huff, and his partner Carol Holden. Both his oldest son, Robert Lee Huff Jr., and his son-in-law, Gary Myers preceded him in death in 2018. In lieu of flowers, memorial donations may be made to: Alzheimer's Association, see the Sam Huff Tribute Page https://tinyurl.com/he2rp45p West Virginia University School of Medicine, Fund for Medicine https://give.wvu.edu/medicine The Huff family would like to invite friends and fans on Saturday, December 4, 2021 to the Erickson Alumni Center at West Virginia University, 1 Alumni Drive, Morgantown, WV 26506 to pay honorable respects to #75 and his legacy. The center will be open from 2:00 PM – 6:00 PM for attendees. Condolences may be extended to the family at www.fordfuneralhomes.com. The Huff family has entrusted the care and arrangements to the Ford Funeral Home, Ford Chapel 201 Columbia Street, Fairmont, WV.