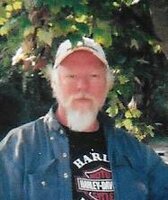 Don Drennen of Rivesville passed on November 16, 2021. He was the son of the late Walter and Gladys Drennen and was born on August 5, 1955. Don is survived by his wife of 45 years Karen Drennen (Barrett). He is also survived by his children: daughter Danielle Bonneville and husband Tim of Rivesville; sons Don Drennen Jr and wife Erica of Nutter Fort, Colten Drennen and fiancé Hannah of Fairmont, and Jason Ware and wife Carrie of Huntington; grandchildren: Alex, Sequoia, Jacob, Caleigh, and Addie; sisters Barbara and Linda of California, Diane of Fairmont, and brother Robert of Pennsylvania; as well as many nieces and nephews. Don was proceeded in death by brothers Edwin, Jesse, Floyd, John, and Sonny. Don graduated from East Fairmont High School and worked for many years at Helmick’s Foundry. He was later employed as a bus driver at the Head Start program before retiring. He was an avid motorcycle enthusiast and enjoyed spending time riding his Harley with wife, Karen, and their many friends. Don was also a sports fan and enjoyed watching the Mountaineers. Above all else, Don enjoyed spending time with family. He was a proud father and grandfather. He was loved by many in his extended in-law family who grew up with him as well. on was a free spirit and wanted his friends and family to remember the good times they shared. In keeping with his wishes, a public service will not be held. Condolences may be extended to the family at www.fordfuneralhomes.com. The Drennen family has entrusted the care and arrangements to the Ford Funeral Home, Ford Chapel, 201 Columbia Street, Fairmont, WV.