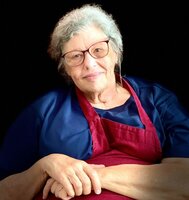 At the minute of 0315 on October 8, 2021 surrounded by her family, Paula Eugenia Kirk won the greatest victory of her life as her lifelong efforts, passions and dedication culminated in her falling into the arm of her Lord and Savior Jesus Christ. Heavenly chorus and angelic choirs were heard as she passed into her eternal joy, reunification and celebration. She was born December 6, 1944, the daughter of the late Paul James and Ada Eugenia Brown Abernathy. She was preceded in death by her loving husband Bill Kirk. They had celebrated thirty-four years of marriage. Paula is survived by a daughter Lois Eugenia Kirk Dent and her husband Asa Beal; one son Lt. Col. Joel W. Kirk and his wife Suzette; one brother Lawrence Barnett Abernathy; three sisters Mary Elizabeth Abernathy, Amy Ruth Abernathy Rhodes and Nancy J. Abernathy Hartley; four grandchildren Preston Tyler Dent and wife Hillary, Grace Eugenia Panker and husband Conner, Joel Kaegan Kirk and Kendall Maelynn Kirk; four great grandchildren Ally Grace Dent, Lucille Claire Dent, David Noble Sutphin and Summer Mae Seitz and multiple nieces, nephews, great nieces, great nephews, cousins, in-laws and a multitude of loving friends. She was also preceded in death by two brothers Andrew Mark Abernathy and Paul James “Jim” Abernathy. Paula “Nana” “PEA” impacted the lives of untold thousands around the world in her role as the Senior Editor for Walk Thru the Bible Ministries where she published “The Daily Walk” devotional publication for over thirty-five years. Previously, she founded and served as principle for Our Shepherds Academy in Roswell, GA. Her entire life’s passion and dedication was to serving others through Christ. In her early years, she was greatly involved in Child Evangelism Fellowship, Overseas Missionary Fellowship and a host of Churches. Throughout her life she had a passion for teaching and mentoring younger women as well as teaching Sunday Schools and Children’s Churches. Paula adored reading books, music, playing piano, studying theology and classics. She was a Master at writing and communicating. In most recent years, she was heavily involved in all events for the Trinity United Methodist Church of Bridgeport and Classical Conversations Homeschooling Network. Locally she was the owner of Kross Kreek Farms, LLC which she co-operated with her son. The farm is host to therapeutic horseback riding centers for children and adults with challenges, birthday parties, weddings and horseback riding lessons. An adamant reader, academic, and consummate learner you would often find Nana surrounded by her immense library gleaning information that she could use to share and help others. Nana’s final mission on earth was the caretaking, foundational teaching, and nurturing of her two adopted great grandchildren that she loved so dearly. She was known for her gift of consoling and helping others through difficult life struggles of almost any kind. She always seemed to “show up” at just the right time. She enjoyed travel, sightseeing, her animals, walking, reading and most of all worshipping Christ and being with her family and friends. If she knew you, she was your biggest fan. She left this earth with no enemies because she never had any. Everyone that new her in any capacity loved her. She was the epitome of living an entire life of Christ centered integrity. The light of our Lord and Savior was always shining if she was in your presence. In lieu of flowers the family requests donations be made in Paula’s memory to Trinity United Methodist Church, 2665 Coplin Run Road, Bridgeport, WV 26330. Please note “For Classical Conversations Lost Creek”. Friends will be received at the Ford Funeral Home, 215 East Main Street, Bridgeport, WV on Tuesday from 3:00 PM – 8:00 PM. The funeral service will be celebrated in the funeral home on Wednesday, October 13, 20212 at 11:00 AM with Pastor Wesley Grissom presiding. The interment will follow at the Trinity Cemetery. Condolences may be extended to the family at www.fordfuneralhomes.com. The Kirk family has entrusted the care and arrangements to the Ford Funeral Home, 215 East Main Street, Bridgeport, WV