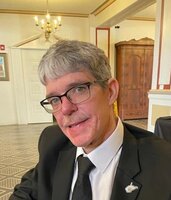 Thomas R. Reed, 57, of Fairmont, passed away on Thursday, September 16, 2021 at Ruby Memorial Hospital in Morgantown. He was born January 16, 1964, in Fairmont, a son of Margaret A. Springer Reed, and the late Walter Scott Reed, Jr. He is survived by his loving wife of 28 years, Karen Shaver Reed. Tom was a member of Central Christian Church in Fairmont and a 1982 graduate of Fairmont Senior High School. He worked with the Marion County Assessor’s Office as an assessor, and had previously been a long-time employee of Sams’ Club in Fairmont, Clarksburg, and Morgantown, as well as with Sears Department Store in Fairmont. Tom was a loving husband and father. He was a firm believer in our Lord Jesus Christ and was a servant of Almighty God. He loved his country and his state. As an American Patriot, Tom was a firm believer in the Bill of Rights, especially that of the Second Amendment. Tom was a proud member of the National Riffle Association, and was a huge firearms enthusiast. He enjoyed hiking, hunting and shooting with his son and friends. He loved family gatherings and spending time with his loved ones. He was loved by all who knew him. In addition to his wife and mother, Tom is survived by his son John Jarrett Reed and his companion, Elizabeth Williams of Fairmont, his brother, Walter Scott Reed III, and his wife Tina of Fairmont, his niece, Taylor Marie Mancini and her husband Braden of Fairmont, his uncle, Otis Shaver of Fairmont, his brother-in-law, Robert R. Shaver of Pinehurst, NC; as well as numerous aunts, uncles, and cousins. Memorial donations may be made to Gateway United Methodist Church, 301 Diamond Street, Fairmont, WV 26554. The family has entrusted the funeral arrangements to Ford Funeral Home, 201 Columbia Street, Fairmont, WV. Visitation will be held in the funeral home on Monday, September 20, 2021 from 4PM until 8PM, and on Tuesday, September 21, 2021 from 10 AM until 11AM. The funeral will be held in the funeral home on Tuesday, September 21, 2021 at 11 AM with Reverend Larry Buckland and Pastor Bill Toothman officiating. Interment will follow at the Clermont Cemetery in Fairmont. Online condolences may be made to www.fordfuneralhomes.com.