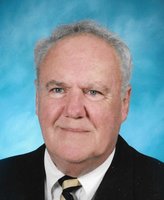 Dr. Howard S. “Juno” Charlton of Fairmont and Haines City, Florida, passed away on Wednesday, July 7, 2021, at Ruby Memorial Hospital. He was born June 12, 1934 in Fairview the son of the late Howard S. and Fern Hamilton Charlton. Juno is survived by his wife, Myrna “Kay” Hess Charlton; daughters, Dr. Judie Charlton and her husband Bruce Andrews of Morgantown and Elizabeth Nan Murray and her husband Randy of Fairmont; grandchildren, Brooke Andrews, Reed Andrews, Will Andrews, Hunter Murray, and Alexandrea Murray; great-grandchild, Adelyn Murray; brother, James “Butch” Charlton and his wife Beverly; step-son, Brian Morris of Charlotte, NC; as well as numerous nephews, nieces and their families. In addition to his parents, Juno was preceded in death by his sister, Bonnie Jean Mills. Juno was a graduate of Barrackville High School, Fairmont State College, and had earned a Masters & Doctorate Degrees from West Virginia University. Dr. Charlton was an outstanding athlete at Barrackville High School and Fairmont State. In high school, he had scored 44 points in just one-half of a game. At Fairmont State, he scored over 1,000 points over his four-year career and held the WVIAC Tournament rebound record by 26 rebounds for many years. Dr. Charlton began his teaching career at East Fairmont High School. During his time at East Fairmont, he coached the swimming and soccer teams at Fairmont State College. In the summers he was the manager of the Fairmont Municipal Swimming Pool. His instructional program at the pool involved six to seven hundred youngsters mostly in beginning and intermediate swimming each summer. He was always pleased to see children learn to swim. After seven years of teaching at East Fairmont, he was named assistant professor and coach at Fairmont State College. However, before the fall term began, he resigned his college position after the Marion County Board of Education named him the assistant principal at Fairmont Senior High School. Six years later, at the retirement of Willard Malcolm, he was named principal at Fairmont Senior. During the summer of 1976, he was appointed assistant superintendent of the Marion County Board of Education and served the school system for 13 years in the position. He completed his educational career as superintendent of the Hancock County Schools. Dr. Charlton remained involved for many years in genealogical research of his family heritage having published two books regarding the Charlton and Hamilton families of Marion County. He was the four great-grandson of Boaz Fleming, the founder of Fairmont; the two great-grandson of Richard Amos, the founder of Amos, VA which later became Fairview; the great-grandson of Judge Benjamin Franklin Charlton, a lawyer, surgeon, and fosterer of public education in the Mannington District. In addition to genealogical research and writings, and after retirement, he was a ghost writer for an out of state firm writing a book in fable form. Having spent most of his adult life as a resident of Fairmont, he served his community well by participating in numerous community activities and organizations. These include Fairmont Kiwanis Club, president of Fairmont State College Alumni Association, member of First United Methodist Church, president of Marion County Cancer Society, member of Fairmont Masonic Lodge #9 A.F.&A.M., West Virginia University Alumni Association, Marion County Red Cross Chapter, Sons of the Revolution, and president of the Woodlawn Cemetery Board of Directors, and other educational organizations on the state and national levels. While serving Woodlawn Cemetery, he conducted a fundraising drive which raised close to $25,000. This kept the cemetery solvent for quite a few years. As a young school administrator, he was named West Virginia Outstanding Young Administrator. In retirement years, it was extremely gratifying for him to come into contact with his former students and to be informed of their endeavors and successes. He cared for Marion County and its school system. The family requests memorial contributions be made in Dr. Charlton’s memory to First Presbyterian Church, 301 Jackson St., Fairmont, WV 26554. The family will receive friends at Ford Funeral Home, R.C. Jones Chapel, 1410 Country Club Road, Fairmont, WV 26554, on Sunday, July 11, 2021 from 3 p.m. until 8 p.m. and on Monday, July 12, 2021, from 11 a.m. until 12 noon. The funeral service will be held in the funeral home on Monday, July 12, 2021 at 12 noon with Reverend D.D. Meighen officiating. A committal service will follow at Woodlawn Cemetery where full masonic ritualistic services will be conducted by Fairmont Masonic Lodge #9 A.F.&A.M. Online condolences may be made to the family at www.fordfuneralhomes.com.