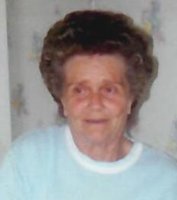 Mrs. Margaret Ann Broll, 95 years of age and formerly of Rivesville, WV passed away on Sunday, May 2, 20201 at Genesis Pierpont Center, Fairmont, WV. She was born June 16, 1925 in Rivesville, WV the daughter of the late Mike and Stella Linsky Klich. She was preceded in death by her husband Richard Ernest Broll in 2008. They had celebrated sixty-six years of marriage and she was a faithful wife caring for her husband. She is also survived by a daughter Tina Naternicola and her husband Steve of Rivesville, WV; a son David Broll and his wife Linda of Fairview, WV; six grandchildren Christy Cleghorn and her husband Chris, David Broll II and his wife Jessica, Chris Naternicola and his wife Christy, Kirk Naternicola and his fiancé Shannon Amundson, Melissa Lileas and her husband Joe and Derek Suba and his wife Melissa; nine great grandchildren Madison Kaylyn Dean, Jordyn Faith Dean, Trey David Broll, Briella Grace Broll, Cash Anthony Naternicola, Nicholas Kirk Naternicola, Izabella Rose Lileas, Zachary Jon Suba and Joshua Conner Suba; and a son-in-law Stanley Suba. She was also preceded in death by a daughter Connie Broll Suba and a step-sister Gertrude Dragisic. Margaret was a graduate of Rivesville High School. Her Christian faith was very important to her. Previously, she was a member of Assumption Catholic Church in Rivesville and then attended St. Peter the Fisherman Catholic Church in Fairmont. Her enjoyment came from the flowers grown around her home and her talent of candle wicking embroidery. These gifts she shared with her family and friends. The family wants to acknowledge the care and compassion given to Margaret by the wonderful nurses and aides at the Genesis Pierpont Center. Friends will be received at the Ford Funeral Home, DeGarmo Chapel, Second and Jasper Streets in Rivesville, W V on Wednesday from noon-2:00 PM and 5:00 PM – 8:00 PM. Catholic Funeral Rites will be celebrated in the funeral home on Thursday, May 6, 2021 at 1:00 PM with Deacon David Lester presiding. The interment will follow in Mt. Zion Cemetery. Condolences may be extended to the family at www.fordfuneralhomes.com. The Broll family has entrusted the care and arrangements to the Ford Funeral Home, DeGarmo Chapel.