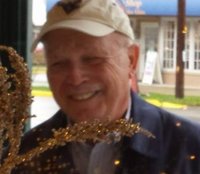 Robert Wade Stewart, 82, of Fairmont passed away on Wednesday, March 24, 2021, at his residence. He was born in Wheeling on May 5, 1938 a son of the late Robert Woodrow Stewart and Sarah Chapline Stewart Rodgers. Bob was raised in the home of the late Raymond and Anne Chapline Wade. Bob is survived by his loving wife, Karen Shriver Stewart; daughters, Erika Rawoot and her husband Abbas and Pamela Boggs and her husband Mike; grandchildren, Joe Grieco, Lexi Ashton and her fiancé Zeke Burruss, Chloe Munson and her husband Jeff, his Rawoot step-grandchildren, Maya Nikolova Johnson and her husband Brian, Zachary Kniceley and his wife Breanna, Sarah Meadows and her husband Ernest, and Samantha Boggs; great-grandchildren, Ella Lou Kniceley and Bastion Johnson; brother, George Stewart; and close friends, John Dewitt and Mike Hoffmaster. In addition to his parents, Bob was preceded in death by his step-father, Kenneth Rodgers and brothers, William Stokes, Randy Rodgers, and Ron Rodgers. Bob was a 1956 graduate of Wellsburg High School and 1959 graduate of Allegheny Technical School in addition to attending both Fairmont State College and West Virginia University. He served in the U.S. Army during the Cuban Missile Crisis and was active with the WV National Guard where he served in the 249th Army Band. He honorably served his country for a total of 29 years. Bob retired after 41 years from Allegheny Power Company as an engineering technician. He was a member of the Fairview Community Band, Highland Avenue United Methodist Church and was active with the United Methodist Men, Lifelong Learners, and Acacia Lodge #157 A.F. & A.M. Bob was a model railroad enthusiast and enjoyed being an avid traveler. He was also a gifted artist and belonged to the Fairmont Art League. In lieu of flowers, the family requests memorial contributions be made in Bob’s memory to the Fairview Community Band, PO Box 106, Fairview, WV 26570. All services will be private for the family. A committal service will be held at the West Virginia National Cemetery in Pruntytown, WV with Pastor Jackie Chambers officiating and full military rites and full masonic ritualistic services will be conducted. The family has entrusted arrangements to Ford Funeral Home, 201 Columbia St., Fairmont, WV 26554. Online condolences may be made to the family at www.fordfuneralhomes.com.