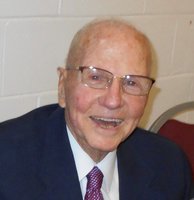 EG Lusk, 96, of Bridgeport, went to be with our Lord on January 6, 2021. He was born January 24,1924 a son of the late Emory Guy and Lola McCoy Lusk. He was preceded in death by his wife of 73 years, Madelyn Mills Lusk. EG graduated from Richwood High School in 1942. He served in World War II with the United States 14th Army Air Corp, 308th Heavy Bomb Group in China. He was a crew member on a B-24 bomber that was awarded the Distinguished Flying Cross. After returning home, he married Madelyn Mills on October 17, 1946. EG worked for Monongahela Power Company for forty-one years, in Richwood, Clarksburg, and the General Office in Fairmont. He was a faithful member of Simpson Creek Baptist Church and a 32nd degree mason of A.F&A.M. Late Lodge #63. He is survived by two children, David Lusk of Louisville, KY and Jane Lister and her husband Rick of Eagle River, AK; five grandchildren Charles Lusk, Matthew Lusk, Heidi Lusk Johnston, Nora Ellen Lusk and RJ Lister and 5 great grandchildren; two sisters Lucille Ferguson of Summersville and Ann Spencer of Richwood and sister-in-law Barbara Lusk of Fairmont. He was preceded in death by a son Tim, three sisters Madelyn and Imogene Lusk and Clarice Furr and a brother Dan Lusk. In lieu of flowers, the family requests donations to Simpson Creek Baptist Church Deacon Fund, 231 W. Philadelphia Avenue Bridgeport WV 26330. A Celebration of Life Service will be held in the summer. Condolences may be extended to the family at www.fordfuneralhomes.com. The Lusk family has entrusted the care and arrangements to the Ford Funeral Home, 215 East Main Street, Bridgeport, WV.