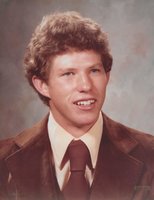 Larry Ray Greene, 60, of Fairmont, passed away at his residence on Thursday, January 7, 2021. He was born on November 18, 1960 in Fairmont a son of Bevelyn Hope Fluharty Greene and the late Lloyd “Bud” Earle Greene. Larry was a member of the Gateway United Methodist Church and formerly the Methodist Temple Church of Fairmont. He was a 1979 graduate of East Fairmont High School where he was active in athletics. Larry had been employed with Overbrook Incorporated in Virginia as a heavy equipment operator. He had enjoyed boating and water skiing on the Tygart River in his younger years, as well as snow skiing, snowmobiling, hunting, and multiple outdoor activities. In 1989, Larry was involved in an automobile accident in Ranson, WV which resulted in a severe head injury and required in home care for the rest of his life. Larry enjoyed visits from his family and friends, but especially loved his time with his daughter and his grandchildren. Larry is survived by his loving and devoted mother, Bevelyn H. Greene of Fairmont, his daughter, Adrienne and her husband Michael Tharp of Waynesburg, PA, his grandchildren, Xander Brock and Bexley Ray Tharp, his brothers, Danny and his wife Barbara Greene of Worthington, Jeffrey and his wife Cheryl Greene of Fairmont, his sisters, Maureen and her husband Neil Ward of Fairmont, Donna and her husband Paul Yearsley of Kingmont, and his twin sister, Terry and her husband Tim Underwood of Wheeling, WV, as well as several nieces and nephews and his former wife, Kerri Grandstaff of Fairmont. In addition to his father, he was preceded in death by his brother, Lloyd E. “Buddy” Greene, Jr. Memorial donations may be made to the Gateway United Methodist Church, 301 Diamond Street, Fairmont, WV 26554. The family would like to thank Jeannie Poole and Glenna Valero both of Fairmont for their loving care and attentive concern they have given to Larry over the past 15 years. The family has entrusted arrangements to the Ford Funeral Home, Ford Chapel, 201 Columbia Street, Fairmont, WV 26554. Due to the COVID-19 pandemic all services will be held privately with Reverend Jim Zinn and Tim Edin officiating. Interment will be held privately at Beverly Hills Memorial Gardens in Westover. Online condolences may be made to www.fordfuneralhomes.com